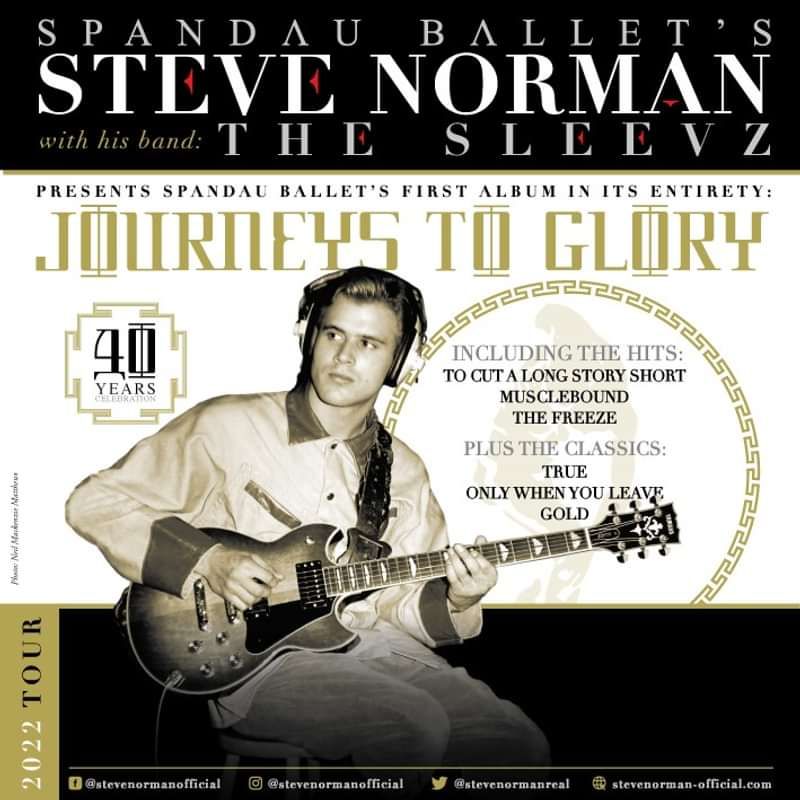 Steve Norman and The Sleevz - Journeys To Glory 40th Anniversary

Steve Norman and The Sleevz

STEVE NORMAN, co-founder, saxophonist and multi-instrumentalist of the world-famous SPANDAU BALLET takes this very special event out on tour in February 2022. The show is to celebrate the 40th anniversary of the release of Spandau Ballet’s ground-breaking debut album, ‘Journeys To Glory’. Steve, accompanied by his five-piece band ‘The Sleevz’, will perform the album in its entirety for the first time. Journeys To Glory contained the band’s first hit single, ‘To Cut A Long Story Short’ plus other singles, ‘Musclebound’ and ‘The Freeze’. The show will also feature later Spandau classics, including ‘True’, ‘Gold’ and ‘Only When You Leave’, and will give Steve an opportunity to show his prowess as a talented guitar-player alongside his more well-known sax and percussion duties.

Steve has many career highlights including performing at the Live Aid concert at Wembley Stadium and being involved on Band Aid’s Christmas classic ‘Do They Know Its Christmas’. With Spandau Ballet, he has toured the world playing to huge audiences in stadia and arenas. In 2015 Spandau Ballet released a critically acclaimed documentary movie about the band’s story called "Soul Boys Of The Western World" that premiered at the SXSW Music Festival in Austin, Texas. Steve has played saxophone, guitar, percussion, and sang for a wide selection of artists over the years including Holy Holy featuring ex-“Spider from Mars” Woody Woodmansey, Tony Visconti (David Bowie producer) & Glenn Gregory; Marc Almond; Earl Slick (Bowie guitarist); Mike Garson (Bowie pianist & keyboard player); Steve Harley & Cockney Rebel, Bruce Foxton; Glen Matlock; Kim Wilde and many others. However, he achieved a personal goal when he performed on-stage with the legend that is Iggy Pop.

The soundcheck experience ticket will allow early access to the venue to listen and watch 2 or 3 songs from the soundcheck and to meet Steve and the band etc. These will be limited to 20 only.

Steve Norman and The Sleevz