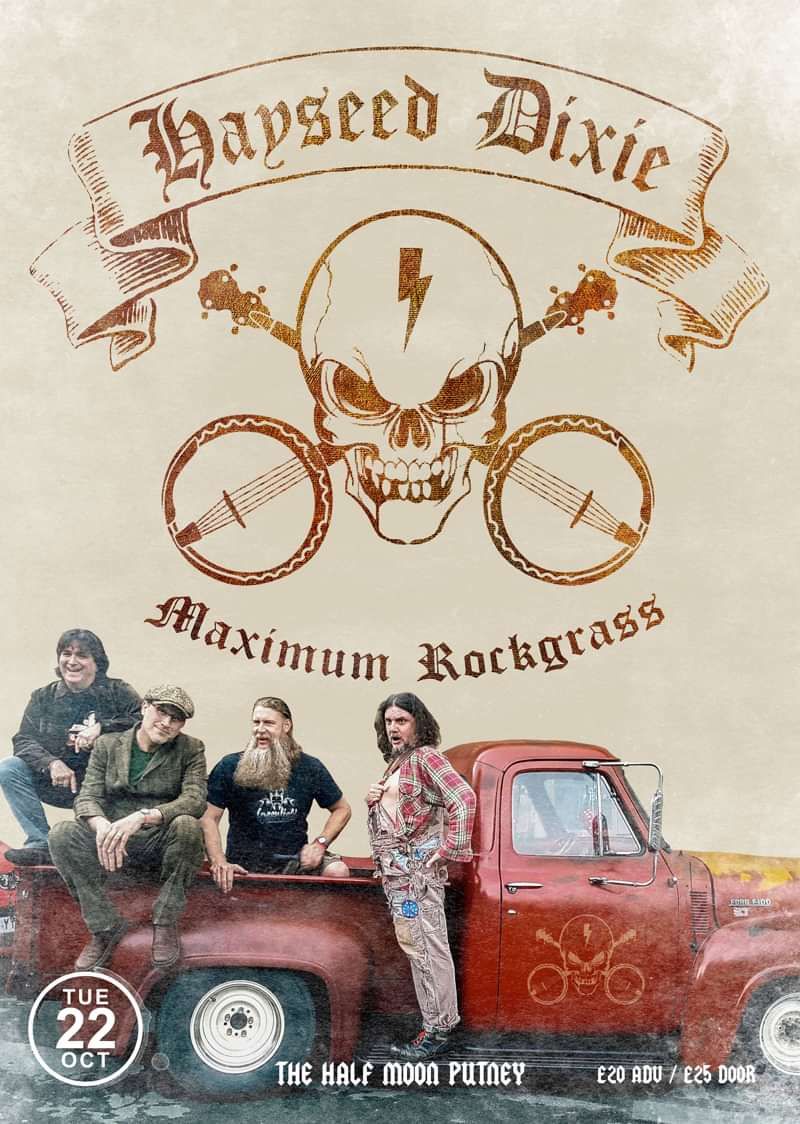 Formed in 2001 with the release of their first album, titled "A Hillbilly Tribute To AC/DC," Hayseed Dixie are acknowledged as the creators of the musical genre "Rockgrass."

East Nashville, Tennessee in the Summer of 2000 was a proper Bohemian party place. Nobody had any money, but since the playing field was level, nobody much let that get in the way of anything fun, and a few other friends stopped by, drank some whiskey, and played and sang on this recording here and there. And ten classic AC/DC songs were suddenly re-imagined and recorded forever anew, entirely reinvented as Appalachian Mountain hillbilly rave-ups. Everyone danced (oh how they danced!) around the studio room and out onto the front porch and drank more whiskey. You should have been there. Really. You should have. Oh well.

Fast forward through 17 years, 14 further albums - consisting of both original songs and reinterpretations - and over 1,300 live shows, and Hayseed Dixie have evolved into a proper force, one that some people deeply love, other people truly hate, and quite a lot of people have never heard of. Such is the life of a cult band.

Now, about the BRAND NEW ALBUM! Released worldwide on April 14, 2017, “Free Your Mind and Your Grass Will Follow” is the 15th studio album. It finds Hayseed Dixie holding up their own idiosyncratic mirror to an unsettled and unsettling 2017 in a collection of both original songs and reinterpretations of R&B and Soul classics. Dance and sing along with Hayseed Dixie as they probe the queries: “Why do we still believe there is such a thing as ‘race’?” “Are concepts like ‘nations’ and ‘nationality’ really useful to people who lay bricks or perform kidney stone removal surgeries?” and “Why does every song always sound better with a banjo in the mix?” The boys are seeking after the root core categorical commonality that runs like an eternal golden braid throughout all of humanity - so they can buy it a drink!

Formed in 2001 with the release of their first album, titled "A Hillbilly Tribute To AC/DC," Hayseed Dixie are acknowledged as the creators of the musical genre "Rockgrass." Hailing from the Appalachian Mountains of the Southeastern United States, the band consists of:

Having sold over 500,000 records worldwide, the band has successfully spread like a virus to every continent except Antarctica.