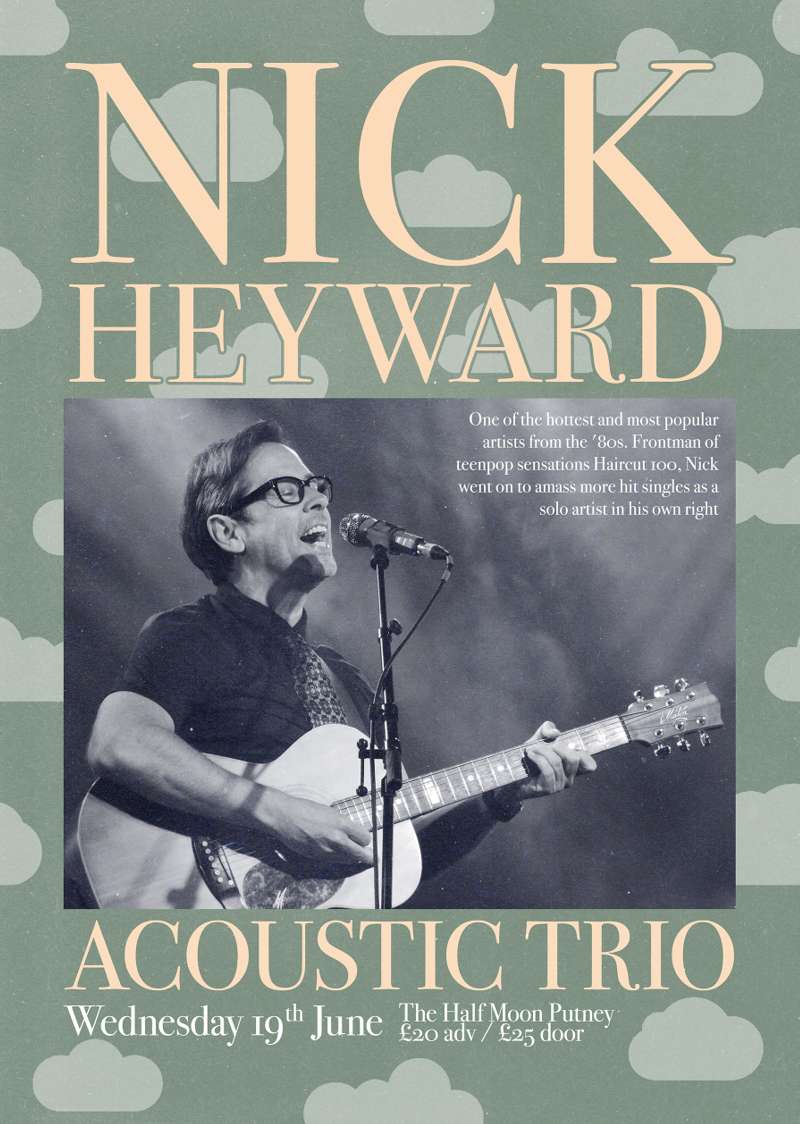 Following the success of his most recent album, Woodland Echoes, and tours of the UK and Japan, singer-songwriter Nick Heyward returns with an acoustic Trio in 2019 for a series of intimate dates around the UK.

It’s a treat to have Nick Heyward back making premium pop music. In 1985, Nick told Smash Hits that “I want to make the kind of LP you can wrap up and give to someone as a present. No duff tracks at all, just 12 shining wonderful singles, I suppose.” In 2017, with Woodland Echoes, he has finally achieved his goal.

Butterfly support with an acoustic set.

Woodland Echoes is singer, songwriter, guitarist and pianist, Nick Heyward’s ninth album, tenth if you include Pelican West, the pop-funk masterpiece that he released in 1982 with his first band Haircut 100. 35 years later, Nick is looking out at his world, and likes what he sees. “I’m glad I’m alive, I’m glad that I’m writing and putting records out,” he says. “It’s great now because it’s easy to be independent.”

One of the first phrases Nick sings on Woodland Echoes is “hold tight, take a leap of faith.” His first pop record in 18 years is an accidentally autobiographical reflection of the course his life has taken in the 21st century. It’s influenced by love, nature, togetherness, 70s pop, America, open spaces and afternoon tea. It is the sound of a confident man in his mid-50s making music for nobody but himself, and asking some basic questions about who is closest to you in your life.

Recorded at his home, on a houseboat in Key West, and Zak Starkey’s Salo Sound studio deep in the UK countryside, Woodland Echoes took a long time to come to fruition, which did not trouble Nick in the slightest. “At first, I wanted it finished straight away. I thought it would take about a week,” he says. “And it would just be out – that’ll do. But then, ‘that’ll do’ became impossible for me; in fact, it was the opposite – as soon as someone said something would do, I knew it wouldn’t!”

Woodland Echoes feels unhurried, made with love. It was only when he began to compile and sequence the album, he knew he had something different: “These songs were reflective of the past 10 years. When I came to compile it, it was really easy to sequence – it came together like a storybook, a love story. I realised that the songs were chapters. It starts with time passing; you find love and get a significant connection with your other half, in the forest of love. I’d never really had that connection. I didn’t know why I could always split up with people – it was either them or me.”

The passage of time is reflected on the album – it begins with a cuckoo clock ticking; as you age you become more selective about who you spend time with; no longer the hasty friendships of youth. “Who [the track] is about the question of who do you keep and who you let go,” Nick continues. “When you stop looking for what you want, it is often there in front of your nose.”

Woodland Echoes gained even greater resonance for Nick himself as he started to write a blurb to accompany the record; a whole imaginary, metaphoric world opened following a love story between a cuckoo and a bluebird; this in turn, has started to flesh out ideas for a forthcoming stage presentation of the album. “I’m planning on an art centre/theatre show of the love story, whether it’s through dance or animated film, with my hits in the second half. I get really inspired by shows at the National Theatre and the Barbican; I see a lot of stuff at The Place in Camden – I saw this couple dancing around a lightbulb to this most beautiful music; it was like they were moths, it was more effective than any rock concert I had ever been to.”

People talk today about living in the now, the present, but a lot of Nick’s songs have always been about the present. “I write a lot of sad songs – songs about people leaving each other,” Nick told Smash Hits in July 1985. Nick agrees with his younger self and sees how he has moved on: “You have to find peace and love; it’s a process – my early songs were always bittersweet – the verse would be going through the struggle, but then it would be ‘it’s a fantastic day’; but there was always that struggle. That struggle is not around on this album, it’s gone.”

Nick’s ability to put some strange words and chords together and make a beautiful thing is still very much in evidence; His knack of evoking a happy time and a happy place is maybe his truest talent; to appreciate nature as well as love. Perfect Sunday Sun on Woodland Echoes is a sister to On A Sunday from 1983. There were always lakes, mountaintops, morning, stars, Sundays; celebrating loving leisure time, the ordinary extraordinary in which Nick has always revelled. Humour and surrealism has always coursed through Nick’s work. The joy and accuracy behind the ostensible flippancy of “your favourite shirt is on the bed, do a somersault on your head” is apparent; few lines encapsulate the joie de vivre of being young so well. Woodland Echoes embraces being older better.

Nick Heyward was born in Beckenham, Kent, on May 20th 1961. On leaving Kelsey Park School in 1977, he went to work as a commercial artist, but he had dreams of becoming a pop star. “I got into music because my girlfriend chucked me and because of Paul McCartney’s beard when he sung in ‘Let It Be’,” Nick told Paul Gorman in Music Week in 1995. And soon, Heyward and his friends were ditching names such as Boat Party and Captain Pennyworth left, right and centre and became Haircut 100.

They played the pop game perfectly, tucking their Aran jumpers into their trousers, riding the post-new romantic funk wave, marrying Chic with the Monkees and opening their shows with a blistering cover of Low Rider by War. Haircut 100 burnt briefly and brightly – the ultimate group of pals who, within a year, had hit the big time. It finished as quickly as it began; the band parted ways and Nick’s first solo album, North Of A Miracle, was released in September 1983.

North Of A Miracle set out his stall; a production masterpiece by Beatles engineer Geoff Emerick (XTC had initially wanted to produce Heyward), it contained heavyweight session players; Uncut were to say retrospectively that “If Elvis Costello had released this album, it might just feature in the lower reaches of those lists of all-time greats.”

Nick’s career continued through the next decade and a half – supporting Wham! at Wembley at their farewell shows; shaving his moustache off on live TV; releasing charming records, of which his first two of the nineties From Monday To Sunday and Tangled chimed with Britpop. He played the record company game across the years – and he has great experience of major labels and sizeable Indies; Arista, Warner and Sony have all sought him out; when Alan McGee was flush with Oasis cash in the late 90s and wanted to sign his personal favourites, Nick Heyward was at the top of that list, and 1998’s The Apple Bed was released on Creation.

But those days are over – you don’t have to be a voracious follower of musical trends to know conventional release channels have altered forever. Nick teamed up with Pledge Music, the direct-to-consumer site that allows Nick to speak directly to his audience, who have made Woodland Dreams a reality. While the battle for the music industry was playing out as the 00s became the 10s, Nick stood aside from all this, released two albums under the radar, and got on with the business of life; seeing his children grow up, and finding love. “Up until the Creation time it used to really matter that you were not around – now it doesn’t seem to matter if you haven’t been around for one year or 20 years; you can pick up where you left off. It’s the way that music has turned out – there was a time when people cared about disappearance, but now there isn’t; it’s not an issue anymore.”

The democratisation of music through streaming services means that people can graze tunes because they like them, or like the name of the artist, without worrying what the music press says – today it boils down to ‘do I like this record or not’? And with Woodland Echoes, there is a great deal to love. That said, Nick has had more than his fair share of adulation in the past – Danny Baker raved about Pelican West in NME, and Nick pulled off the remarkable feat of being feted simultaneously by Smash Hits and The Face. “This feels to me like the first part of a solo career,” Nick says. “I don’t really see it as ‘solo’; I just make music, that’s what it is. When you’re a writer, that’s what you do, you don’t see yourself as a ‘solo’ writer. This is the first time in years I feel confident and I believe in myself. I want to do it properly; that means having a manager; it’s taken me years to get to this point – I’ve got two things right in my life now – my lady and my manager; they were the two things I had missing.” 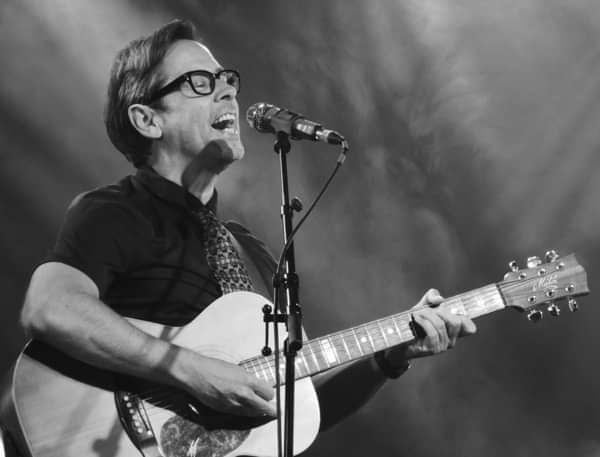